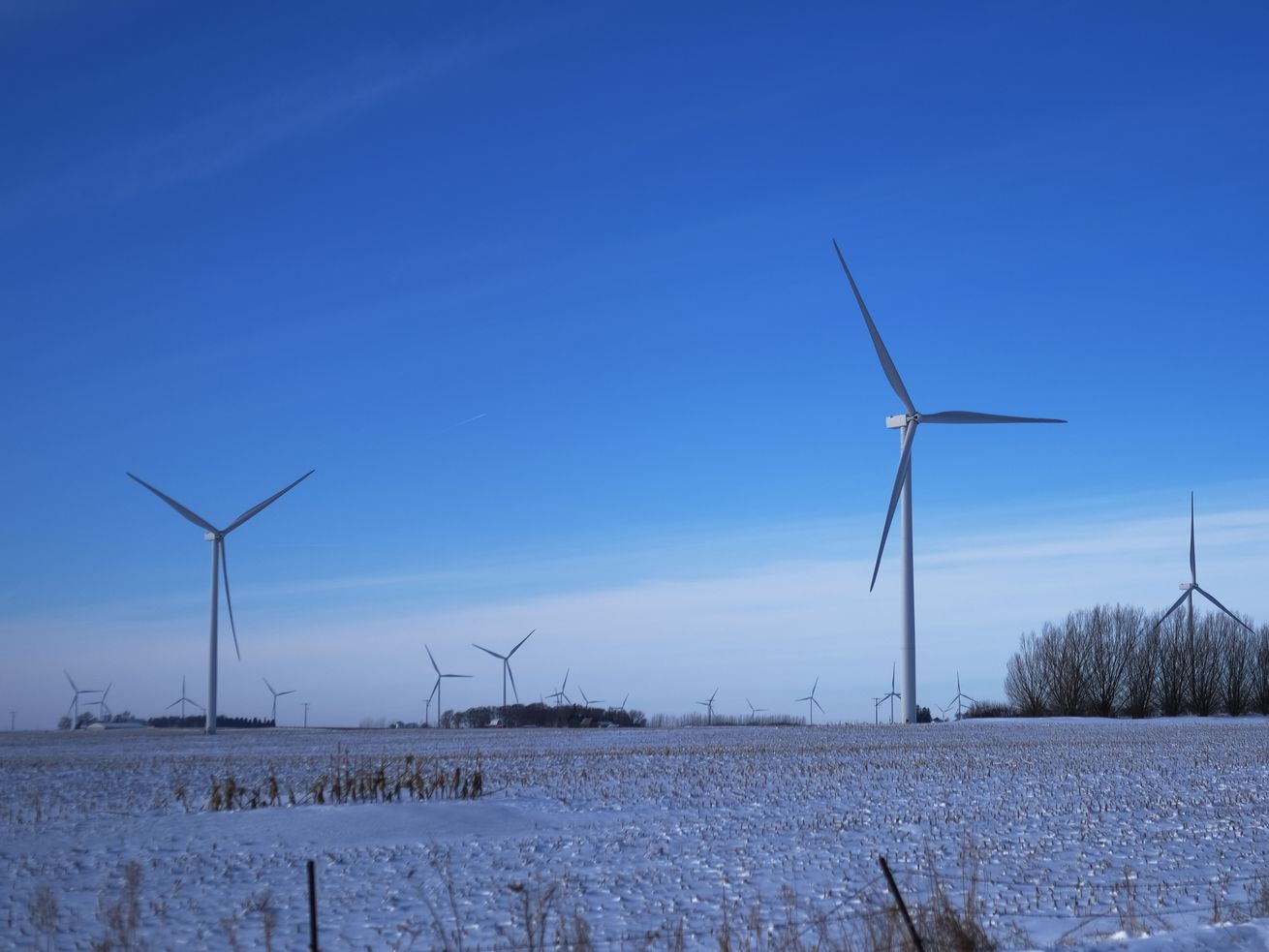 Some Republicans want you to think wind turbines caused the Texas blackout. Here’s why they’re wrong.

As the energy crisis in Texas deepened this week, leaving millions without power, heat, and even running water, conservative commentators and politicians persistently peddled a myth that wind turbines are to blame.

“It seems pretty clear that a reckless reliance on windmills is the cause of this disaster,” Tucker Carlson said Monday on Fox News. Texas Gov. Greg Abbott also used wind power as a scapegoat for the crisis when he appeared on Fox Tuesday night, but he later walked back his comments.

Let’s get the facts straight. Every type of power plant — whether powered by coal, natural gas, nuclear, solar, or wind sources — in Texas was impacted by the ice and freezing temperatures that arrived with Winter Storm Uri over the weekend. But it was natural gas — the state’s top source of electricity — that failed most significantly as wellheads and power plants froze over. Wind turbines, meanwhile, were responsible for 13 percent of the total lost electricity output, according to the Electric Reliability Council of Texas (ERCOT), the state’s nonprofit grid operator.

But there is nothing innate about wind power — or natural gas — that caused these power plants to fail. It’s merely a matter of preparation, Hui Hu, a professor of aerospace engineering at Iowa State University who studies wind turbines, told Vox.

The dozens of places reliant on wind energy that are no strangers to cold and ice — from Sweden to Iowa — are proof that the freezing of turbines in Texas was not inevitable. The difference: Unlike in Texas, those turbines were weatherized to operate in the cold.

Does this mean that, as wind power contributes a greater and greater share of electricity in states like Texas, all wind turbines have to be storm-proofed to avoid a future mass blackout like this week’s? This is ultimately a risk calculation that lawmakers and scientists will have to make going forward, but the scale of the damage from this blackout suggests the upfront investment would be worthwhile.

So, how exactly do cold veterans like Iowa keep their turbines turning, and what can we learn from them?

Why only some ice is problematic for wind turbines

To understand how to winterize wind turbines, we first need to take a slightly deeper dive into why ice caused some turbines to fail in Texas.

The answer has to do with the specific intersection of temperature and humidity. At Iowa State, Hu and his research team pinpointed these factors through a decade of research to figure out why some ice impacts wind turbines and what can be done to stop it.

Hu oversees experiments at what he proudly tells Vox is the largest wind tunnel at any US university. Originally set up to test de-icing methods for airplanes, Hu’s lab converted the tunnel to blow icy wind at wind turbine blades when Iowa started to go big on wind power a decade ago. These experiments have given us a lot of information about how to keep wind turbines moving in the winter.

First of all, it’s ice, not a low temperature alone that’s the concern. Some ice can create a cottage cheese-like texture on turbine blades, which slows down airflow. In a field experiment, researchers found that during a 30-hour period when blades iced over, power production dropped by up to 80 percent.

Even worse, this ice can cause turbines to become severely unbalanced and vibrate, potentially even breaking under the stress. So if turbines aren’t winterized, operators will shut them down before they reach that point, Hu explained.

But it is really only one kind of ice that is a significant problem: wet ice, like the kind that formed on turbine blades in Texas when Arctic air met Gulf humidity. Meanwhile, in Iowa, the temperatures are usually so low and the air so dry that smooth “rime” ice forms over turbine blades, which doesn’t affect the turbines as much. You can see the difference in the photo from one of Hu’s team’s experiments below. 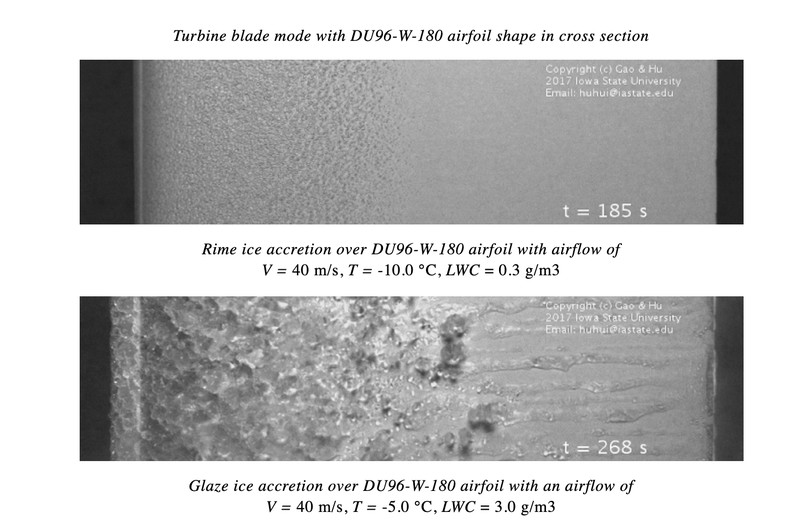 Iowa State University
The difference between dry “rime” ice and wet “glaze” ice — the latter is what impacted Texas’s turbines.

Low temperatures, meanwhile, are not really a problem at all. In fact, as Hu explains, the higher density of cold air actually boosts wind power generation in the winter.

How some of the coldest regions keep their turbines turning

So, how do wind farms respond to these different types of ice, to keep their turbines from shutting down as they did in Texas?

In wetter places like Scandinavia and Scotland, some turbines are filled with hot air while others have a special coating to prevent ice from forming. These winter-ready turbines cost about 5 percent more than regular turbines, and the heating process uses up some of their energy output, Stefan Skarp, who oversees wind power for Swedish utility Skellefteå Kraft, told Bloomberg News. Hu’s team is working on more energy-efficient technologies that could be cheaper.

Because Iowa is blessed with drier ice, wind farms haven’t had to invest in such elaborate measures while reaching the highest share of wind electricity generation in the country: 42 percent in 2019.

Midwestern utility company MidAmerican Energy Company has shown that wind energy is highly reliable, even in harsh Iowa conditions. In 2020, 80 percent of the utility’s electricity was generated by renewable energy — the majority of which comes from its 3,300 wind turbines, said Geoff Greenwood, a spokesperson for MidAmerican Energy.

“This year it’s been cold, but our wind fleet continues to generate clean energy for our customers,” he said. All that’s needed is a few extra measures in the turbine design to make sure the electronics don’t freeze up.

Some Iowa wind operators use flashier action movie techniques to keep their turbines going. Helicopters and drones swoop over turbines dropping hot water or de-icing chemicals. But this is typically just a one-off measure if bad ice hits, Hu said.

Should Texas winterize all of its turbines?

Given that winterizing turbines costs more, should Texas wind developers take a cue from Sweden and pay that price upfront to help avoid future disasters?

Jesse Jenkins, an assistant professor of energy systems engineering at Princeton University, argued in a New York Times op-ed on Wednesday, that electricity systems need to be ready for future risks. “Preparing for extreme events is like buying [a] home or health insurance: it costs you every year and you hope you’ll never use it. But when a crisis strikes, paying the premiums can look like the perfect decision in hindsight.”

After this crisis comes to an end, “Texans will have to determine just how much insurance is worth taking out,” he added.

This doesn’t just apply to one type of power generation. “Because wind is the new kid on the block, it’s getting a lot of attention,” said Kerri Johannsen, energy program director at the Iowa Environmental Council. But all grids have to consider whether their systems can weather the extremes brought by climate change.

Oversight is increasing to ensure grids are up to the challenge. The Texas Tribune reported that the North American Electric Reliability Corporation is working on establishing mandatory requirements for power plants to prepare for winter extremes. However, Texas operates its own grid, so it is only subject to its own rules.

Texas has ignored previous guidance. In 2011, after a storm caused a severe blackout, ERCOT developed winterization guidelines, but they weren’t enforced. Now, facing the consequences, Gov. Abbott has called for these winterization measures to be required and for the state legislature to fund the required upgrades.

As the old saying goes, “You never let a crisis go to waste.” After all the havoc that the grid failures have wreaked this week, it’s critical that these calls for action don’t just fade away as they did after 2011. Texans should know wind itself isn’t the problem; it’s a question of how much insurance state leaders are willing to purchase to prevent another disaster of this magnitude.

‘Get Me On The First Flight Outta Here’ Says John Cornyn In Hoodie, Sunglasses Banging On Bahamas Airport Desk